Kurt.energy has been using hybrid powercapacitors with success for more than 2 years. A new generation is now becoming available.  Twice as high energy densities, a lower internal resistance (< 10 mOhm) while still offering 20000 cycles, no risk of spontaneous fire, operating from -40 to +80°C, robustness, high power, fast charging, and a close to 100% DoD means that this new generation is now becoming a real but safe and robust alternative for Lithium-ion batteries, especially for demanding applications. Kurt.energy has been testing and validating two types:

The reason Kurt;energy focuses on hybrid powercapacitors is our aim of robustness and safety, in conjunction with power and sustainability. The latter means first of all a long cycle life, resulting in the lowest cost per cycle. We have done extensive charge/discharge tests beyond the datasheet and even hard short-circuit tests with positive results. With just airflow-based cooling (a small fan on the test table), the G-series 23680 remained operational at more than 4C, while the Y-series 21700 cells could tolerate up to 16 C.

New assembly schemes were developed. Batteries have been configured for selected early customers.

Our datasheets have now been updated and include the second-generation cells.

For a quick overview: https://kurt.energy/range-of-cells/

Visit the page with datasheets and graphs here 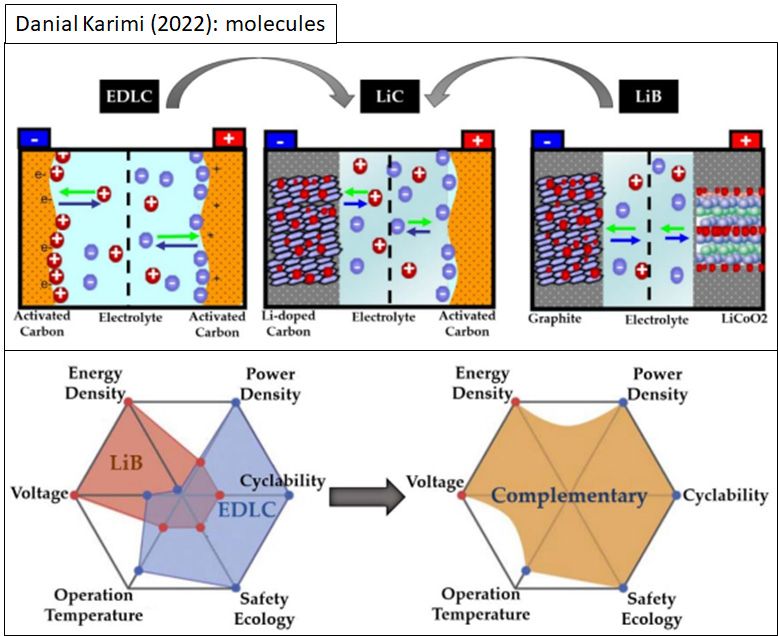 Altreonic has now reached the milestone of delivering a powercapacitor battery in the Multi-Moby project. The aim is to demonstrate the use of powercapacitors in the I-FEVS light electric vehicles for urban use, in this case in the context of light logistic operations. These vehicles are powered by a 48V drivetrain (2 motors of 7.5 kW) developed by Valeo.

Powercapacitors offer a high power density, hence a fast-charging capability in combination with many other advantages like safety (no-fire risk), simplicity and robustness (no BMS, no active cooling or heating needed), a high DoD (96%), and long cycle life (20000 cycles). While the energy density of the selected 18650T cells is lower than of traditional LFP cells, this is compensated by the high power capability. Hence a smaller battery can be installed (reduces the cost and energy consumption) but it changes the drive and charge schedule. For example, the capacity can cover a distance of about 100 km (the daily average in urban environments) but can also be charged very fast (about 10 minutes) if the charging infrastructure allows it. This scheme is perfect for light urban logistics whereby a trip is often composed of short stretches (with a lot of accelerations and braking) and the driver taking short breaks from time to time. 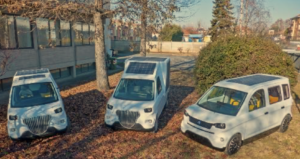 Based on these assumptions Altreonic conducted battery load simulations using adapted driving profiles. Driving profiles are typically speed-time or speed-distance profiles and must be mapped onto a power-time profile of the vehicle to take into account the parameters of the vehicle and the powertrain. The result is a power load profile (provided by the University of Surrey partner) that can be used with our battery load simulator. We selected a WLTC1 adapted profile as being representative of limited speed driving in a city. As a result, we opted to develop 2 battery modules of 3,3 kWh (66 Ah) capable of delivering 2 x 35 kW sustained. This leaves ample space in the battery to increase the capacity should this be needed but also allows to use of heavier motors for higher speed profiles.

The simulation graphs show that 8 cycles of the modified WLTC1 driving cycle can be completed with some energy left (about 2 %). Total driving time is about 13000 seconds or over 3.5 hours. The currents in the battery are on average less than 0.5C, this means that the battery will not heat up. During these 8 cycles 0.6 battery life cycles are consumed (+ 0.5 for recharging). In practice, an urban vehicle will travel less distance per day and we can expect 2 to 3 driving cycles per day. Our next step in the project is to investigate the use of the second-generation cells as discussed above.

For a comprehensive overview of the Multi-Moby project, read the draft paper accepted for the upcoming TRA conference.