Kurt.energy a division of Altreonic NV (Aarschot, Belgium) has partnered up with Tomen of Shenzhen (P.R.China) to develop the market for clean energy system solutions. Core of the solutions is a novel type of carbon based power capacitors.

Carbon based Power Capacitors are a new technology for storing electric energy. They offer an energy density similar to Lithium-ion battery cells (from 80 to 230 Wh/kg) but with a power density as found in supercapacitors (a few 100 to 1000’s W/kg).

Systems equipped with the Power Capacitors store as much energy as with the best batteries, but can deliver it up to 20x faster, providing the performance of much larger batteries. Safe and reliable with no BMS and no thermal management needed. Working from -40 °C to +80 °C for up to 50000 cycles. 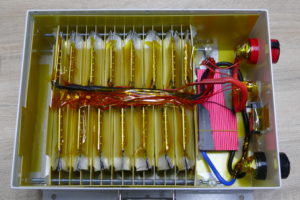 Until now, these power capacitors are available in the typical cylindrical format and are already in production. Kurt.energy will be showing for the first time a new carbon based power capacitor with an energy-mass density of 230 Wh/kg and an energy-volume density 972 Wh/dm3 in pouch format. The test battery delivers 48,0 VDC, 40,0 Ah and is composed of 28 pouch sized cells, each of 4,0 VDC and 20,0 Ah nominal. The battery module can deliver its nominal current continuously at 40 A, with peaks of 80 A. Operating temperature range is -40°C to + 80°C with a lifetime of 10000 charge/discharge cycles. Such a power capacitor battery can be used without a battery management system and no thermal management if used in nominal conditions. Further tests are underway to better specify its operation envelope.

Typical use of such batteries are reliable long term battery storage and traction batteries. Its thermal and safety properties make it very well suited for harsh and demanding environments.