Simulating a powercapacitor battery before it is built.

At Kurt.energy we supply customer-specific battery packs. The starting point is often a set of requirements (see Requirements form on contact page) from the customer describing the application requirements. This allows us to select an appropriate cell technology and to configure a suitable battery pack. The latter can range from small packs with just a few cells (e.g. for IoT and portable devices) to large MWh multi-module batteries as used in heavy traction vehicles like trucks or trains.  The configuration tool calculates nominal capacities and static datasheet values. Most of our customers are interested to know how the battery will behave over its often 10 years or more lifetime. And as many applications are very dynamic, especially in hybrid propulsion systems, a static calculation can only be a rough estimation. 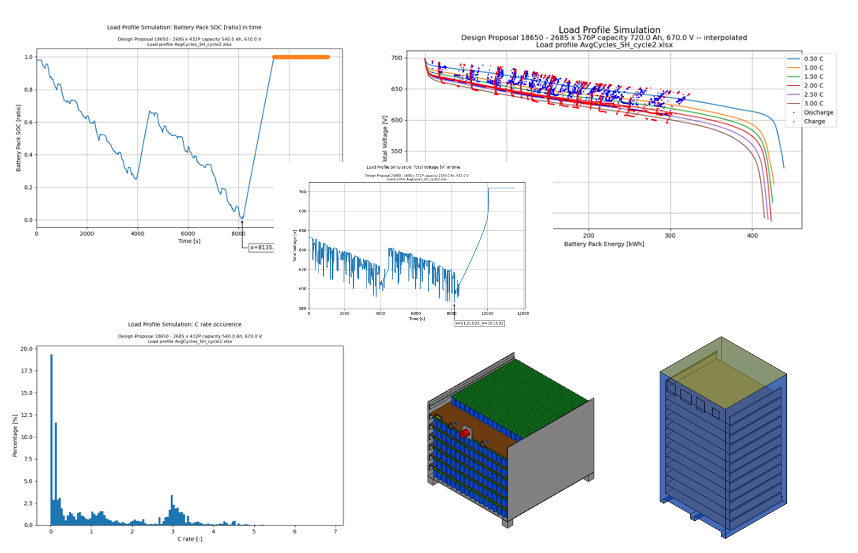 Hence, we developed a battery load simulator that takes into account the real load profile and the real battery graphs. The latter is crucial because contrary to classical battery cells, power capacitors can reach high C-rates (up to 20 times the nominal current) which makes it hard to execute load profile simulations. Input is a given SxP battery configuration, real test data of reference batteries, and the load profile given how the load in power or current changes over for example a days’ operation. The output is a large number of cycle life data giving charge/discharge cycles (at 100% DoD), energy flows and SoC evolution, the voltage over time, expected heat losses, current and C-rate histograms, etc. All this data can then be used to either adapt the battery configuration, compare between different solutions, and estimate calendar lifetime. The latter is often very important and hence the exercise is often done in reverse. Starting from an End Of Life capacity (60% or 75% of the nominal capacity) a battery is calculated with a Begining Of Life capacity, guaranteeing that the battery will perform as required over its whole lifetime. Above some screenshots of the simulator output.

The simulation tool also allows executing a sensitivity analysis (e.g. what if the power load varies with 10%) and allows the simulating hybrid traction or energy systems whereby an energy source like a regulated fuel cell or other generator is used and energy is recovered (e.g. by regenerative braking). Contact us for more details or if you are curious to see how the simulator will deal with your power load.