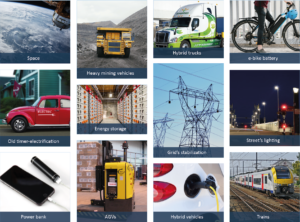 In search of a cleaner world, electric energy is gaining a lot in attention. Tiny electrons are the new fuel but without the inefficient chemical process that requires oxygen; producing heat and unwanted combustion gases as a not always useful and desired side product. Fuels however have a few advantages: the energy density is high, the energy release can be fast and they are relatively easy to transport and to put at work, even when the efficiency is not that high. Electrons on the other hand can be very efficiently put at work. They provide us with power by moving through wires with minimal losses. Often silently and without any visible by-products. The disadvantage is that electric energy is like water flowing from a mountain. If not captured, it must be used when generated. This is why we need batteries that store electric energy, a lot of them. For example for when the sun is not shining or shining too much on our solar panels, or to allow our mobile phones to work without a grid connection, to drive around in an electric car, etc. The fundamental disadvantages of batteries are however that we can’t yet store and release the electrons very efficiently. Electrons are very tiny. In classical electrochemical batteries, we actually store them using a reversible chemical reaction. Typical examples are the classical lead-acid car batteries and the now widely used lithium-ion ones. Capacitors on the other hand store the electrons statically. This allows for very fast storage and release, but because the electric charges are mainly a surface phenomenon, capacitors can’t hold much energy. The tiny electrons are the reason that batteries and capacitors are heavy.

As no battery today is really outstandingly good, the worldwide search for a better one is intense and we are bombarded daily with new announcements. The issue at heart is that an outstanding battery must be practical and sustainable in use. The main requirements are a high(er) energy density and more power, essentially the capability the store and release more electrons faster with less mass. Just imagine your car battery would be feather-light. But there is more. Lithium-ion battery for example can short circuit over time and when that happens, it can start a ferocious fire of the whole battery pack. The culprits are not the electrons but the redox reaction and the flammable electrolyte. Hence, batteries need to be safe. Another requirement is that they can work at freezing as well as hot temperatures and they should last a lifetime, else they become very expensive to have. The lifetime requirement is one of the most important ones when it comes to sustainability and being practical to use. 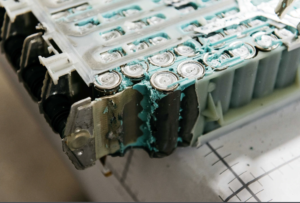 The most widely used batteries today are variants of Lithium-ion. In cars, the NMC-type dominates because they have the highest energy density. Energy provides for range. But cars and many other applications also need power, i.e. the capability to charge and discharge fast. Here we hit a roadblock. Power requires current and in conjunction with the unavoidable internal resistance, this generates heat. The heat is quadratic with the current and this is the main cause of a fire and cell degradation. Hence, such batteries are not just a collection of cells, but an elaborate mechanical construction with liquid cooling, sensors, and software-driven controllers that carefully manage and monitor the battery. See the picture on the left exposing part of a Li-ion battery pack. These can take 1/3 of the weight and volume. If such a battery fails, then it is a costly operation to replace it, if even the whole car has not to be replaced.

The alternatives: a trade-off war

There are of course alternatives to NMC. LFP batteries are safer but have less energy and power. LTO has more power but even less energy, but also a better lifetime. There are alternatives to Lithium-ion as well. Solid-state batteries do away with the flammable electrolytes and can store more energy, but this results in very low power densities. Other batteries use different materials like Lithium-sulfur and recently Silicium. These are promising improvements but to meet all requirements in a volume production process, is not a trivial step. Flow batteries are a lot cheaper, have a long lifetime, and are safe, but they have a low energy and power density, making them unpractical for many applications, except pure energy storage. We also have fuel cells. These use a chemical reaction that combines hydrogen with oxygen in the air to generate electricity. While much progress has been made, fuel cells are still bulky and suffer from the latency between changing the hydrogen flow and the generation of electricity. Hence they still need buffer batteries to handle the dynamic power requirements. While progress is continuously made, it still looks like the fundamental chemical and physical parameters of batteries prevent us from making a tenfold improvement. The featherlight battery is not for tomorrow, so what can we do? 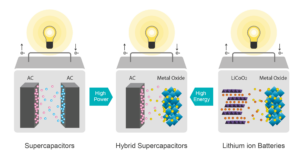 As no battery technology on its own can provide the best in class for all parameters, why not combine them? Lithium-based supercapacitors are good at most of the parameters, often even too good on power capability, but are poor at energy density. Hence, we develop a hybrid device using activated carbon (a variant of graphene) as one of the electrodes and using a classical lithium compound as the second electrode. The result is a cell architecture that works like a capacitor inheriting its properties but also delivers a decent energy density. It is also a battery that no longer needs a complex Battery Management System, no expensive cooling, provides decent power capability, is inherently safe easily lasting 10 to 30 years (or 1 million miles). Moreover, as the main active component is carbon, it needs less Lithium to be produced. Depending on the Lithium compound used, we have cells optimised for power or for energy. While the hybrid power capacitors deliver 80 to 100 Wh/kg, they can be charged very fast and deliver up to 20 times their nominal power. The hybrid energy capacitors deliver 230 Wh/kg and can deliver up to 1,5 times their power with no active cooling.

The benefits of going hybrid 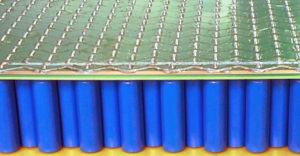 While the energy density is not spectacularly better than the best of Li-ion cells, this is largely compensated by the other parameters. The result is a battery that doesn’t need to be over-dimensioned but can deliver the power when needed and can be charged relatively fast (up to 75% in 5 minutes at 12C is reachable), although the latter requires a corresponding charging infrastructure that is not yet common.

As one can see in the picture on the left, the resulting battery pack is very dense, yet very straightforward to put together. It’s very robust and simple and therefore resulting in a very trustworthy battery that will last a lifetime without any fire risk.

The challenge: driving an e-car like a classical one

As was highlighted, a battery needs to meet several often conflicting criteria to be an acceptable solution from the technical point of view. When we put them at work, for example in electric vehicles, the results must also be acceptable by the market. Is it practical to use? Is is better or at least as good as what people are using now? Today’s classical fuel based cars are convenient to use. One can fill it up in a few minutes and depending on the driving profile, one can easily bridge a 1000 km before the next fill-up. Given that the energy density of fuel is 80 to 100 times higher than the energy density of batteries achieving the same is a tough challenge. The solution is to work on multiple fronts. Charging in 5 minutes requires charging at 12C. Only hybrid powercapacitors can provide this with an acceptable energy density. One should not underestimate the impact on the charging system. Currents will be very high. Secondly, the vehicle efficiency also needs to be tackled. While a Hyundai Kona Electric recently set a range record of 1026 km, the driving conditions were very specific with an average speed of about 30 km/hr. This reduced the energy consumption to about 6.2 kWh/100 km, which is two times better than when driven normally. But it gives us a hint. An energy efficient electric vehicle doesn’t need to be a 3 ton SUV that accelerates like a sports car. If the vehicle is designed from the start as a “battery on wheels” (as batteries remain heavy and large) and the energy consumption can be reduced to 5 kWh/100 km, which is a mostly a matter of weight and drive train efficiency, then a 32 kWh battery will provide for about 600 km range that can charge 475 km in just 5 minutes with a 300 kWh charger. It might not be a sports car but at least it is a practical and economical car to drive.